For further information or booking requests go to Contact

The name Western Avenue derives from its original function as the western border of the City of Los Angeles. Starting around 1900 Los Angeles expanded by annexations towards the West ending in Venice at the Pacific Ocean.

Western Avenue still forms the geographic backbone of the LA-Basin and stretches about 28 miles north to south. Starting at Griffith Park as part of the Hollywood Hills it runs almost straight down to White Point County Beach.

The northern part and a small corridor in the southern part of Western Avenue are located within the City of Los Angeles. Inbetween it becomes part of several independent small towns like Lomita, Torrence, Gardena, Inglewood or Hawthorne. The neighborhoods change from the wealthiest – like Palos Verdes in the south – to the most economically depressed with a high level of unemployment and still prevailing gang-activities like South LA.

Due to the original function as a major north-south thoroughfare the southern part of Western Avenue still is dedicated as State Route 213 –despite construction of the freeways starting in the 1950ies. Compared to the northern part the architecture und the building-functions change accordingly.

As part of the city growth the first gated communities were realized along the road at the beginning of 20th Century, today being part of the West Adams Historic District. Some of these communities are still favored residential areas with a sound social environment.

The buildings along Western Avenue are witnesses for more than a hundred years of architectural history in Southern California.

To walk the 28 miles long WesternAvenue on a “low speed” hike – instead of using the all prevailing automobile – offers the chance to experience the exciting architecture along the street with its manifold details, even of abandoned buildings.

Because most of the buildings alongside Western Avenue are rather small in scale, they can not adequately be perceived from inside a car. The architectural quality, uniqueness of detailing or the historic quality is not being recognized.

Knowing that, it became quite reasonable to me that several times -while I was preparing the project in LA- I was not only asked to be careful walking down Western Avenue (a picture-taking pedestrian in South-LA) but rather “why did you choose Western Avenue”.

The project WesternAvenueWalk presents the “slow motion” alternative to the prevailing car-inherent perception within Los Angeles and emphazises the architectural and urban quality of this historic street.

The exhibition WesternAvenueWalk consists of several artifacts. According to available exibition-space they might vary in number.

The ideal floorplan to show all artefacts of the exibit is as follows: 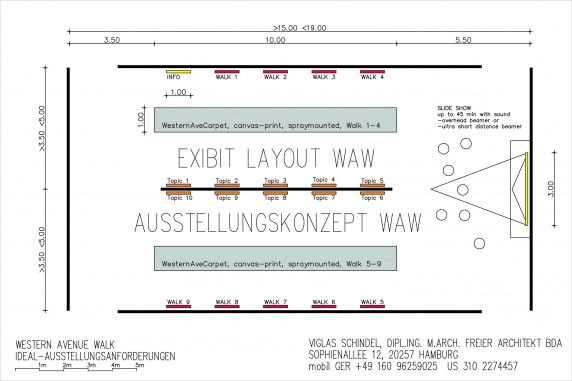 The following artefacts are available:

The show will be arranged according to  available exibit-space and equipment either with overhead-beamer, ultra-short-distance-beamer or on extra large Monitor. See the general layout of the slide show below:

The center pic shows the actual walking-progress as a pedestrian along Western Avenue – one picture every 110 yds covering a total distance of 28 miles. It changes every 1-2 sec. The outer pictures present the buildings along the respective Walks 1-9. They are changing every 4-8 sec.

The show might be organized as continuous loop or be started manually: